The Ultimate Guide to Cohiba Cigars

It is well known, at least in cigar circles, that the Cuban cigar brand, Cohiba, was created in 1966 for Fidel Castro and only made available as gifts to visiting diplomats and dignitaries. In true James Bond – like fashion, for years Cohiba cigars were made solely by women in a top-secret location, the now famous El Laguito factory, which took its name from the pond which is situated in the grounds. To call it a factory is rather misleading. El Laguito is French styled colonial mansion built by the industrialist, Alberto Casimiro Fowler Jimenez, a British citizen who had made his fortune from skyrocketing sugar prices during the First World War.

Linea Clasica is the original range of Cohiba cigars, the first sizes or vitolas being introduced in 1966. Over the next thirty years or so more sizes and shapes were added to the range. The most recent, the Piramedes, was released only a few years ago, in 2012. 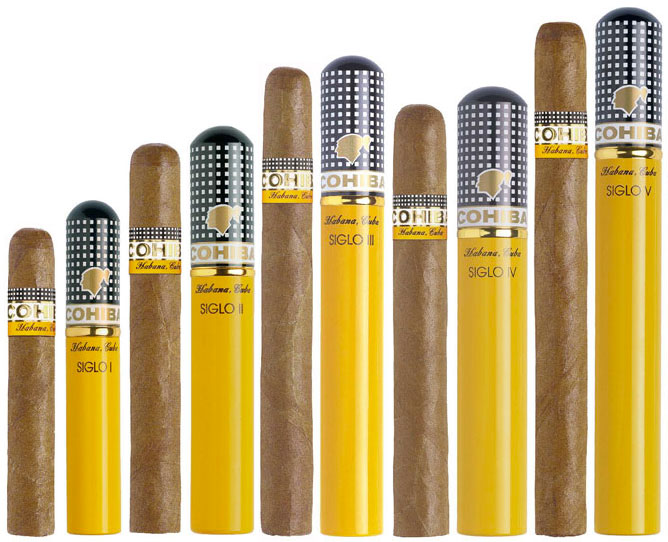 As the date suggests, the milder flavoured, and more classical shaped Linea 1492, was presented to the market to celebrate the 500th Anniversary of Colombus’ arrive in Cuba. The release of Linea 1492 coincided with the demise of the Davidoff Cuban brand.

Launched in 2007, the three vitolas that make up this range possess a dark, rich Maduro wrapper. Whilst other countries like Dominica and Nicaragua regularly produce Maduro wrapped cigars, it is a rarity in Cuba. The number ‘5’ in the title refers to the length of time wrapper leaves are aged - five years.

Arguably the rarest Cuban cigars on the market. The three vitolas take their name from their respective ring gauge: 56, 54 and 52. What sets these three cigars apart from all others is the inclusion of a fourth type of leaf – Medio Tiempo – that only appears on the top section of the tobacco plant and only when the growing conditions are favourable.

There are five principle tobacco regions in Cuba. From west to east - Vuelta Abajo, Semivuelta, Partido, Remedios and Oriente. However, the leaves that are used to make Cohiba come from two of the finest planations in the Vuelta Abajo: San Luiz and San Juan y Martinez.

The story of Cohiba’s creation may be apocryphal but it is worth re-telling. The story goes that Castro’s bodyguard lit-up a cigar whilst driving with the Cuban leader. Castro enquired what it was that he was smoking. The bodyguard replied that it was a fuma, a cigar made by his friend Eduardo Rivera Irizarri, who worked in a local cigar factory (Eduardo was to become Castro’s personal cigar roller). Castro then asked to try one of his cigars. He was so impressed that he asked for more to be made so that he could share them among his friends. The unique shape of this cigar – in reality a long panatela that subsequently became known as Laguito No1, a Lancero (7½ inches, 38 ring gauge) – quickly became associated with many of Cuba’s revolutionary leaders, including Ernesto ‘Che’ Guevara.

For a while, Rivera Irizarri rolled these cigars in his spare time, giving them their signature ‘pig-tail’. In 1965, after a period spent training women cigar-rollers, Rivera was asked to set-up a new factory solely for the production of these new cigars and so El Laguito was established and remains the home of Cohiba to this day. For the first few years at El Laguito, every cigar was rolled by women.

The name Cohiba derives from the ancient Taino Indian word that describes the bunches of tobacco leaves that Columbus first saw being smoked by the original settlers of Cuba.

In 1966, during the early stages of developing the Cohiba brand, Rivera visited and selected only the finest leaves from farms in the Pinar del Rio district, including leaves from El Corojo, Cuchillas de Barbacoa and La Fe. It was claimed that only two people knew the exact sources of the tobacco leaves. During this period it was decided to carry out a third fermentation of the tobacco leaves in barrel to further reduce impurities and smooth out the taste. Today, the leaves for Cohiba are referred to as the ‘selection of the selection’ and come from the five finest plantations in the San Juan y Martinez and San Luis districts of the Vuelta Abajo.

For the best part of 18 years Cohiba cigars were never commercialised, remaining solely for the use of government officials and diplomats. Such notable luminaries that received gifts of Cohiba cigars included Josip Tito of Yugoslavia and Gamal Abdel Nasser of Egypt.

In 1982, however, to celebrate Spain hosting the World Cup, Cohiba were introduced into the market by way of duty-free shops. At that time only three sizes were available: Lancero (Laguito No1), Coronas Especial (No2) and Panatela (No3). In 1989, when the brand began to be distributed globally, three further sizes were introduced: the Robusto, the Esplendido (confusingly called a Julieta No2, even though it’s a classic Churchill size, 7”/47 ring gauge) and the Exquisito (a rather slender cigar being a 33 ring gauge and referred to as Seoane).

In 1992, following the withdrawal from the Cuban cigar market of the Swiss company Davidoff, Cohiba introduced La Linea 1492 to commemorate the 500th anniversary of Colombus’s arrival in Cuba. Five sizes were initially launched, each one mirroring the original Davidoff range and were referred to as Siglo, meaning century or age. A 52 ring gauge Siglo VI, called Canonazo was introduced in 2002 and has since become one of the most sort-after Cohiba cigars.

Over the last ten years many limited edition Cohiba cigars have been released onto the market and into collector’s humidors. Perhaps the most significant has been the introduction, in 2010, of the Behike range. The cigars are named after their ring gauge: BHK 56, 54 and 52. Behike, like Cohiba, is a word taken from the Taino Indians. Cohiba was their word for a cigar used during rituals, Behike was the name given to the man who presided over the ceremony. Traditionally, Cuban cigars use three types of filler: the Seco, Ligero and the Volado. Behike uniquely include a fourth leaf, the rare Medio Tiempo. This leaf, which only ever appears amongst the uppermost foliage of the tobacco plant had not been used in the manufacture of Cuban cigars since before the revolution, since it was considered too strong for the blend. The decision to re-introduce this leaf into the Behike at once added a startling intensity and richness to the cigar. Owing to the capricious nature of the Medio Tiempo leaf annual production remains extremely limited and keeps demand exceptionally high.

It seems somewhat ironic, that such a luxury, almost decadent, global brand like Cohiba should have its roots in a communist revolution and be made in an ex-colonial-style home of a British sugar baron. Whilst 2016 will be remembered for many things, including the death of Fidel Castro, it was also the 50th anniversary of the birth Cohiba.